There’s going to be an added flavor to the Iron Skillet in 2022.

After four years at SMU, head football coach Sonny Dykes will head west on I-30 to take over TCU’s football program, per multiple reports. In addition, reports also said that former SMU offensive coordinator Rhett Lashlee, currently the offensive coordinator at Miami (FL), will be the next head coach at SMU.

Multiple sources told The Dallas Morning News that players and coaches found out about the breaking news as they all got on a bus to head to the team hotel for the night. Dykes addressed the team Sunday about the rumors — which had been going on for about a month now — but hasn’t told his team or coaching staff collectively his plans for after the season.

“He just told us his No. 1 priority is beating Tulsa,” senior offensive lineman Hayden Howerton — the school record holder for games played — said Tuesday. “And like anything goes, at the end of the year, we’ll all see what happens. He didn’t give one way or the other, and I’m OK with that, because at least he was honest with us and not lying.

“He’s got to look at his options. Being a fifth-year [senior], I don’t blame him, either way.”

These coaching moves, though not made official by either school, have been the expectation for days.

Sources told The News that Lashlee, the clear front runner for the job since earlier this week, has already had preliminary conversations with coaches at SMU and elsewhere to be a part of his potential staff.

Lashlee, 38, was the offensive coordinator at SMU for two seasons. That included 2019, when SMU won 10 games and averaged 41.8 points per game — the seventh-most in the country that year. Lashlee and Miami face Duke on Saturday morning.

The last game of Dykes’ SMU tenure is expected to be Saturday’s regular-season finale against Tulsa.

Since Wednesday, as rumors about Dykes and other assistants possibly leaving, SMU has lost six commitments, including the Garland star duo of wide receiver Jordan Hudson and safety Chace Biddle. SMU now has six commitments in the Class of 2022 with less than a month until early signing day.

Dykes record at SMU entering Saturday’s game with Tulsa is 30-17. The Mustangs were bowl eligible in three of those seasons, including this year, but only played one bowl game under Dykes: A 52-28 loss to Florida Atlantic in the 2019 Boca Raton Bowl.

Dykes will be replacing a coach who has a statue outside of TCU’s stadium. Gary Patterson coached 21 seasons at TCU and guided the program into the Big 12 Conference. Patterson and TCU agreed to part ways after the Horned Frogs lost 31-12 to Kansas State, dropping the Horned Frogs’ record to 3-5 on the season.

A Dykes departure, after three-straight successful seasons at SMU, isn’t surprising. Power Five schools often poach Group of Five coaches. SMU, according to sources, even had a seven-year extension offer on the table for Dykes that would’ve made him the highest paid Group of Five coach in the country, if not close to it.

“We hired him because we thought he was one of the best coaches in the country,” SMU athletic director Rick Hart told The News back on Oct. 14.

“We want to have leaders that other people are interested in … you want to keep them, and we don’t take having them for granted, but those are the people you want to hire.”

The wheel of realignment turned in a major way this college football season, starting with Texas and Oklahoma’s departure from the Big 12 to the Southeastern Conference. That opened the door for SMU to possibly go to the Big 12, but the conference passed over the Mustangs, electing to go with BYU, Cincinnati, UCF and Houston. People around SMU believe the chance to join a Power Five could come the next time realignment happens, but it’s no guarantee.

At TCU, Dykes will have that Power Five ticket. He’ll also have the chance to build TCU the way he built SMU. He can recruit locally for Fort Worth’s team. He even could add billboards along Dallas-Fort Worth highways as a part of a possible born and raised campaign at TCU.

Speaking of billboards: SMU added one in Fort Worth after the 42-35 win over the Horned Frogs this season. “Pony up, Fort Worth,” it said, featuring Tarrant County natives Alan Ali, Mike Williams and Rashee Rice, who added trash talk to the rivalry game in the week leading up to it, and then attempted to plant SMU’s flag on TCU’s logo after it.

Dykes departing SMU for Power Five pastures was always going to be a possibility. To do it at TCU — a school where he worked as an analyst in 2017 before joining SMU — will undoubtedly add a whole new storyline to the Iron Skillet rivalry between the two teams. 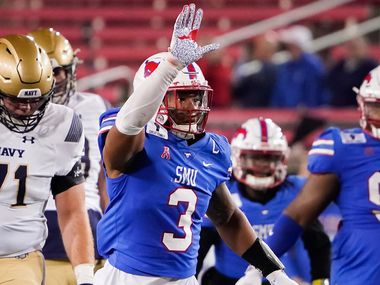