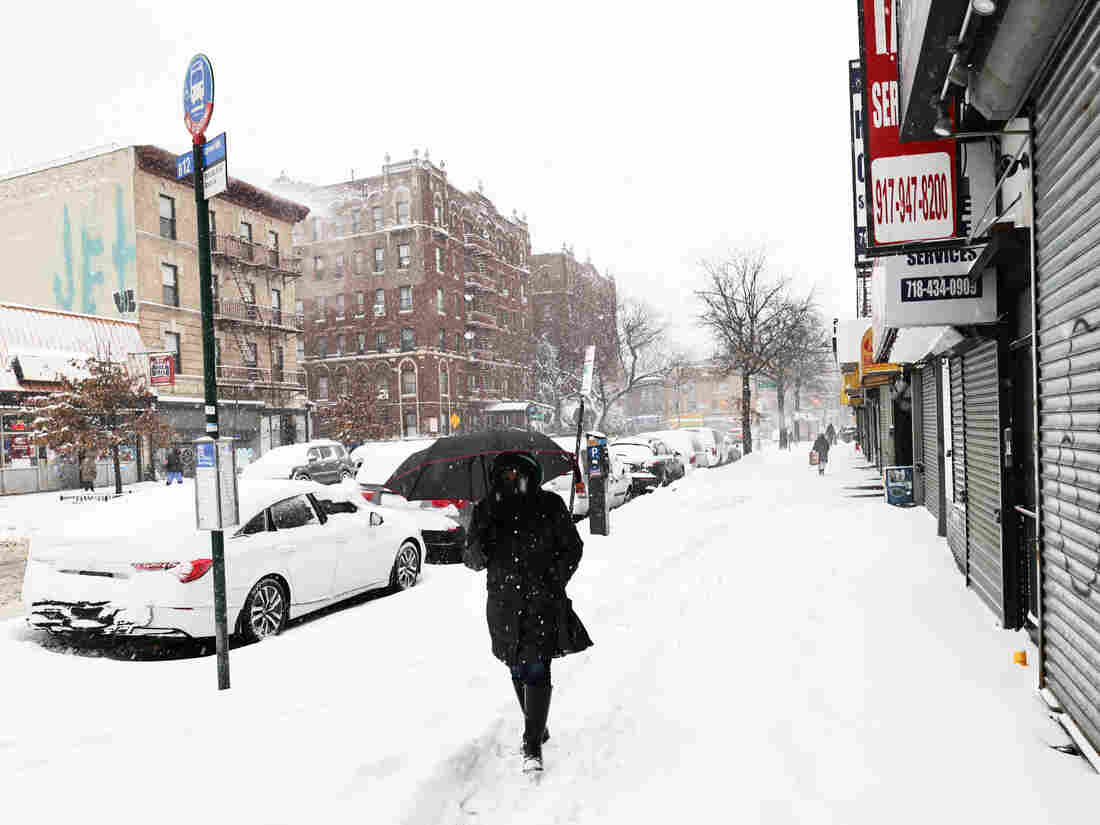 A massive winter storm is bringing heavy snowfall and strong winds to neighborhoods across the Northeast, like this one in Brooklyn, New York. 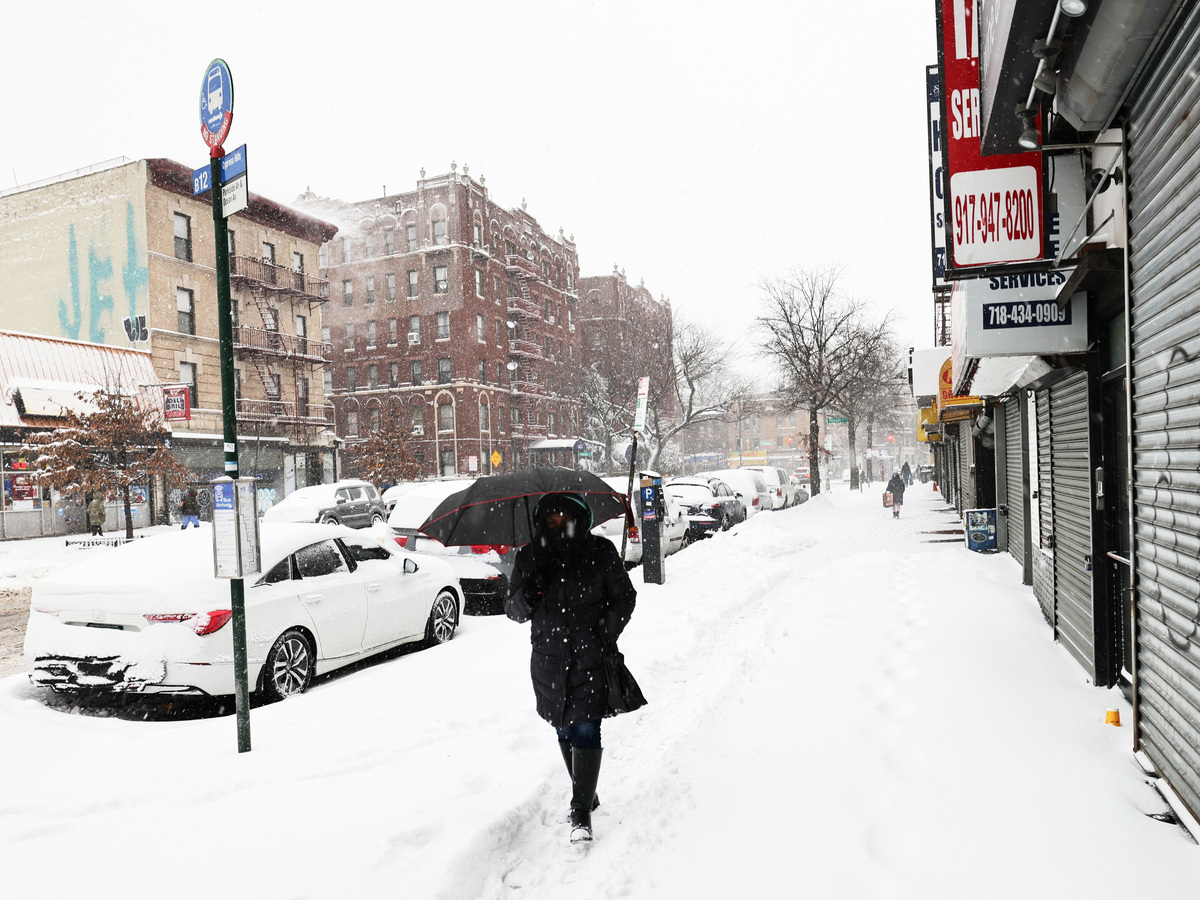 A massive winter storm is bringing heavy snowfall and strong winds to neighborhoods across the Northeast, like this one in Brooklyn, New York.

A powerful nor’easter is working its way across the East Coast on Monday, shutting down schools, vaccination sites and travel as it threatens to dump up to two feet of snow in parts of the region.

The winter storm will bring heavy snow and winds from Pennsylvania to Maine through Tuesday, according to forecasters at the National Weather Service. They expect a widespread snowfall of up to 8 inches.

Today’s Nor’Easter is just starting to get going this morning off the East Coast. 1-2 feet of snow are possible for some major metro areas so many folks can expect to have plenty of time to pass at home. Might as well spend some of it here:https://t.co/nlS1qzWsgY pic.twitter.com/bwv2pJQGji

Forecasters are warning of widespread heavy snow, gusty winds, near blizzard conditions and coastal impacts across the region, including in the Philadelphia, New York and Boston metro areas. The NWS projects “major to extreme” impacts to commerce and travel along and west of the I-95 Corridor, and says scattered downed trees and power outages are possible in parts of the Mid-Atlantic and southern New England.

Winter storm warnings are in place for much of the Eastern Seaboard. The governors of Connecticut and New Jersey have declared a state of emergency, as have the cities of Philadelphia and New York, where Mayor Bill de Blasio signed an order restricting non-essential travel until Tuesday morning.

“Make no mistake: This storm will bring heavy snowfall, and it will make travel dangerous in every neighborhood in our city,” he said, imploring New Yorkers to stay home and keep the roads clear for emergency vehicles.

Mid-Atlantic and Northeastern states were reporting maximum snowfall totals of between 4 and 12.5 inches as of Monday morning. Certain New York and New Jersey counties had already recorded more than 6 inches, with snowfall rates continuing to pick up speed.

Forecasters predict that New York City and other parts of the tri-state area could see between 18 and 24 inches of snow by the end of the day Tuesday, a potentially historic forecast.

So just to be clear, the new forecast for NYC of 21″ would equal the snow that fell in the Blizzard of 1888 and tie the 4th largest snowfall in NYC history! pic.twitter.com/FddGvzAxKU

Near blizzard conditions are possible into Monday night along the coast, where forecasters say the strongest winds are expected.

In the meantime, the storm is grinding many aspects of daily life — pandemic and otherwise — to a halt in much of the northeast.

School districts across the region are closed to in-person instruction or offering snow days. New York City has announced that school buildings will also remain closed on Tuesday.

New York state rescheduled Monday vaccination appointments at several sites in the region, and New York City is closing all of its vaccine sites until Wednesday. In Rhode Island, all state-operated testing sites are temporarily closed, and vaccinations at regional clinics are postponed. New Jersey’s six vaccine mega-sites are also closed for the day.

Massachusetts officials announced that some vaccinations would be closed on Monday, the day the state officially entered Phase 2 of its vaccination rollout. Connecticut Gov. Ned Lamont similarly warned that vaccine appointments may be cancelled on Monday and Tuesday due to the storm.

[8:45am] Wondering about the timing of the snow today? Check out one model’s prediction for how things will pan out through this evening. Please note, heavy snow is expected, and is represented by the dark blue on the map. #mawx #ctwx #riwx pic.twitter.com/3IXL5iEL0z

Lamont also implemented a travel ban on certain tractor trailers, with exceptions for those carrying supplies necessary to the COVID-19 response, a move that he said was done “in collaboration” with neighboring states and in an effort to facilitate transportation of the vaccine.

The storm is also disrupting public transportation and air travel. In New Jersey, for example, almost all public transit service is suspended for the day. John F. Kennedy International Airport announced Monday morning that approximately 83% of its flights had been canceled, with more expected to follow suit. Newark Liberty International Airport, in New Jersey, said some 75% of the day’s flights had been cancelled. New York’s LaGuardia Airport announced later in the morning that airline carriers had cancelled all commercial flights.

The storm hit the Midwest and Mid-Atlantic in recent days, putting millions of people under weather advisories and dumping considerable snowfall totals in the process. The NWS said Monday that Chicago’s O’Hare International Airport recorded 10.8 inches of snow over the weekend, its largest event total since 2015.

NWS forecasters predict that the storm will depart late Tuesday, at which point they will turn their attention to emerging activity in the Northern Plains and Upper Midwest.

“A lot of uncertainty remains, but most models are hinting at an arctic airmass diving south bringing well below normal temperatures,” the agency wrote. “Brrrr!”