Former gubernatorial candidate Stacey Abrams has been nominated for a Nobel Peace Prize for her work promoting voting rights, according to a Monday report.

Abrams, who lost to Georgia Gov. Brian Kemp in the 2018 election, has been credited with boosting voter turnout in the 2020 general election and helping Joe Biden win the presidency. 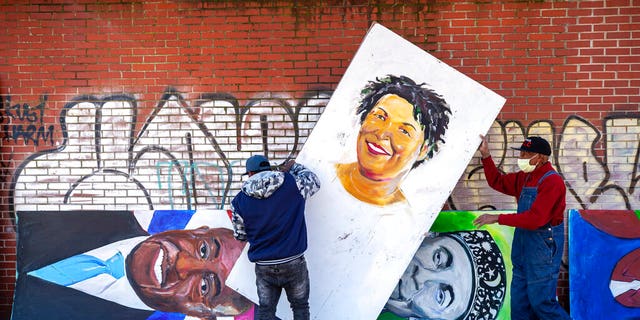 Artists set up a painting of Stacey Abrams in the King Historic District on Monday, Jan. 18, 2021, in honor of Martin Luther King Jr. Day, in Atlanta.
(AP)

Her nomination for the Nobel Peace Prize was announced by Norwegian lawmaker Lars Haltbrekken of the Socialist Left Party, Reuters reported.

“Abrams’ work follows in Dr. Martin Luther King Jr.’s footsteps in the fight for equality before the law and for civil rights,” Haltbrekken said.

REPUBLICANS LAUNCH ‘STOP STACEY’ TO DEFEAT ABRAMS IN GEORGIA IN 2022

“Abrams’ efforts to complete King’s work are crucial if the United States of America shall succeed in its effort to create fraternity between all its peoples and a peaceful and just society.”

King, perhaps the most famous figure of the Civil Rights movement, won the Nobel Peace Prize in 1964.

Thousands of people are eligible to win the prize. Abrams shares the list of nominees with former President Donald Trump and his son-in-law, former White House adviser Jared Kushner.

Many people anticipate that Abrams will announce a rematch against Kemp in the 2022 Georgia gubernatorial election.