Mahomes is on track to becoming an all-time great quarterback but if he wanted to catch Tom Brady, a Super Bowl LV victory is a must-win for him, the CBS broadcaster told reporters.

“The fact that Patrick Mahomes is somehow in this discussion shows you how amazing this guy is,” Romo said, via Boston.com. “There’s a chance for Patrick Mahomes playing this game, to climb the ladder. If Mahomes wins, he keeps that door open. If Brady wins, I don’t know how anyone can top him.

“This is the biggest game Patrick Mahomes will ever play in for the rest of his career. It’s the only way to catch Tom Brady. If he loses this game, he cannot catch Tom Brady, in my opinion.” 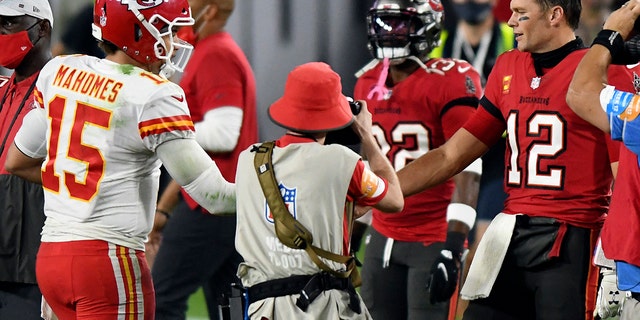 The Super Bowl matchup features the most accomplished quarterback ever to play the game who is still thriving at age 43 in Brady against the young gun who is rewriting record books at age 25. (AP Photo/Jason Behnken, File)

Mahomes could in theory play as long as Brady has and win just as many Super Bowls. He’s only in his fourth year in the league and playing for his second Super Bowl title. Brady had three Super Bowl rings by his fifth season in the NFL. He didn’t win his fourth until the 2014 season.