As expected, but now official, NASA has announced the decision to redo the Green Run Hot-Fire test of the agency’s Space Launch System (SLS) Core Stage at the Stennis Space Center in Mississippi. The Core Stage was fired for 67 seconds on January 16 in the B-2 Test Stand at Stennis before the test was ended early.

The SLS Program, Core Stage prime contractor Boeing, and RS-25 engine prime contractor Aerojet Rocketdyne are continuing to refurbish their vehicle hardware and Stennis is recycling their ground systems for a second attempt to fire the stage for a full eight minute flight duration near the end of February.

A second Hot-Fire test gives the agency a chance to conduct three special gimbaling experiments that weren’t completed in the first attempt, which would gather data on the interaction and interdependence between the four RS-25 engines and the stage’s mechanical systems.

The SLS Program, based at the Marshall Space Flight Center in Huntsville, Alabama, recommended executing a second Hot-Fire test to the Human Exploration and Operations Mission Directorate (HEOMD) at NASA Headquarters in Washington, D.C. earlier this week, and the agency published an announcement of the decision late in the afternoon on January 29.

The first Hot-Fire attempt on January 16 ended a little more than a minute into a planned eight-minute firing of the stage. “After evaluating data from the first hot fire and the prior seven Green Run tests, NASA and core stage lead contractor Boeing determined that a second, longer hot fire test should be conducted and would pose minimal risk to the Artemis I core stage while providing valuable data to help certify the core stage for flight,” the agency statement said.

A second Hot-Fire test was tentatively set for “as early as the fourth week in February,” which, as phrased, doesn’t rule out a repeat of the previous test where the test date was advanced with little notice. Standard refurbishment work after the stage was test-fired for the first time in the original January 16 Hot-Fire test will now be followed by preparations to fire the stage at Stennis again; if the first firing had met or exceeded requirements, the next firing of the stage would be for the SLS Program’s first launch on Artemis 1.

The original Hot-Fire test firing had a beginning and an end, but not much in the middle. Performing double duty as a propulsion test article, first flight article Core Stage-1 demonstrated the program’s first complete terminal countdown, including engine start, along with shutdown and post-test safing.

Although the first-time simultaneous firing of four former Space Shuttle Main Engines (SSME) at the higher SLS power settings provided useful data, the test was planned to extend to eight minutes in duration, and a series of test objectives while the engines were firing barely got started before the abort. In contrast to the engines, which have decades of development, testing, and flight history, the Core Stage systems are new and were being operated in launch conditions for the very first time. 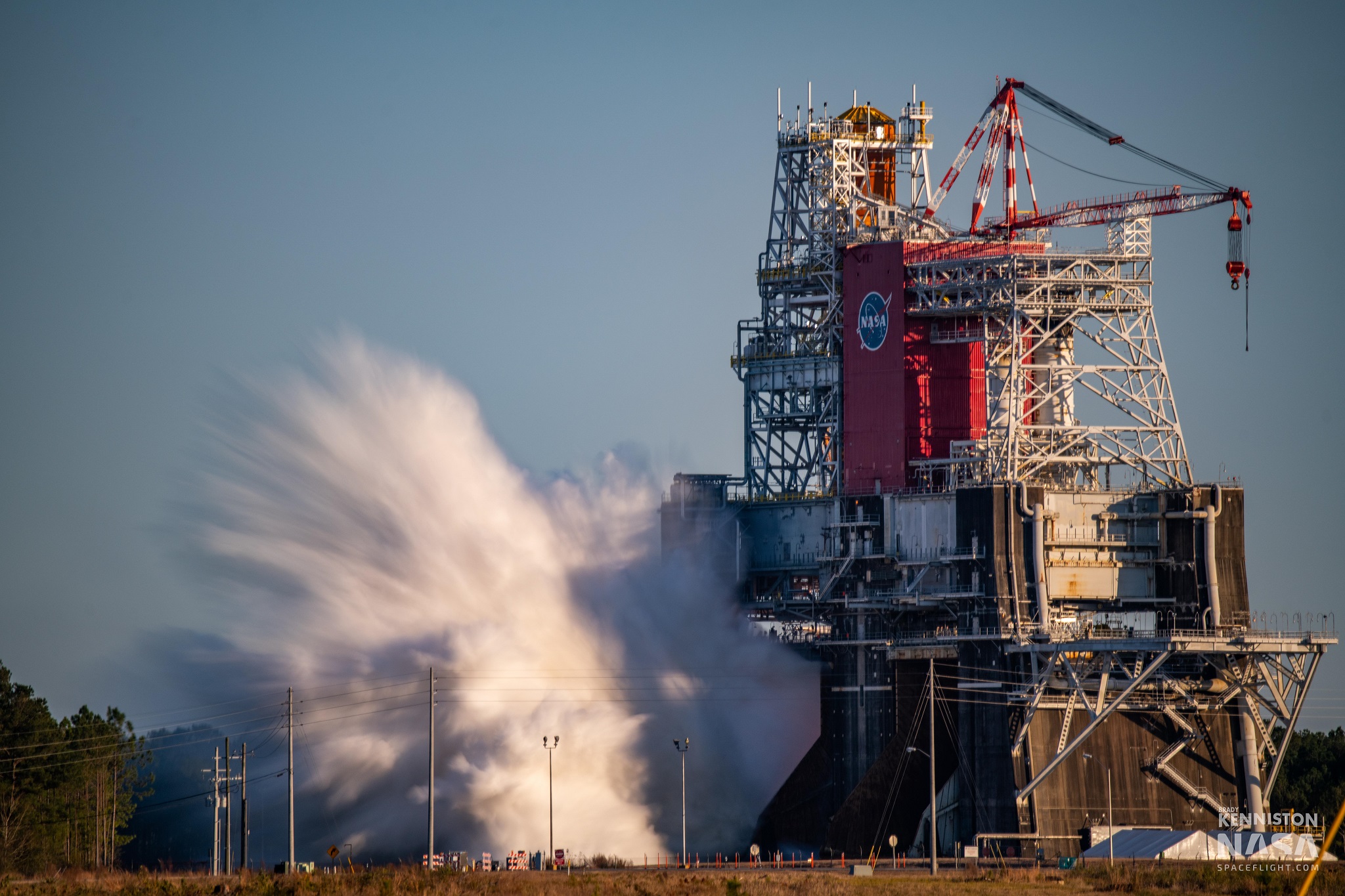 (Photo Caption: The four Aerojet Rocketdyne RS-25 engines in the SLS Core Stage start during the Hot-Fire test on January 16. The engines operated normally during the test-firing, the first time the former Space Shuttle Main Engines had been throttled up to 109 percent power. A bad reading in one sensor value on Engine 4 during startup was quickly disqualified by its engine controller and was unrelated to the later abort of the test.)

After the engines started a little over six seconds before T-0, at T+60 seconds, the first of three test objectives that would help evaluate the firing stage’s real-world behavior had just started when two Green Run-specific limits set for the hydraulic systems were tripped by one of the four systems. One second after beginning a test to move all four engines simultaneously at their maximum gimbal rate, the limits were violated. As programmed, the Core Stage flight computers shut down the engines, aborting the rest of the Hot-Fire.

“About a second into that test we tripped a limit,” Jonathan Looser, NASA SLS Core Stage Propulsion Lead, said referring to hydraulic system number 2. “It was actually two parameters, low hydraulic reservoir fill percentage and a low hydraulic return pressure or suction pressure and the combination of those two initiated the CAPU (Core Auxiliary Power Unit) to shutdown.”

“So we saw that happen and then less than one second later the software detected that [the] system 2 CAPU had shut down and initiated the test abort or the nominal advance to shutdown sequence.” The engines were shutdown at T+61 seconds or after 67 seconds of run-time.

At the cost of an extra month and a half or so of schedule, repeating the Hot-Fire test after making adjustments provides another opportunity to satisfy all the test objectives and learn more about the vehicle and its design.

The decision is similar to what happened with the previous Wet Dress Rehearsal test case, where an initial attempt on December 7 to fuel the stage for the first time was ended early. The Green Run team came back on December 20 and completed fueling and part of a terminal countdown demonstration test.

The SLS Program is still learning how their new rocket stage behaves, such as running at an edge of its operating requirements, which ended the first Hot-Fire test early. “There’s no indication that system 2 or any of the other three systems had any anomalous behavior in terms of how the hardware operated,” Looser noted.

The Green Run testing provides data for engineers to learn about areas where the real-world behavior and interaction of systems on the stage were different from predictions, which allows the analytical models to be improved before the first launch. “It’s a matter of seeing all four systems operate together in a launch-type environment and learning how that operates compared to how we’d predicted in our models and looking at how we can adjust some of those parameters for a future test,” he explained.

Engineers used conservative parameters as limits for the test because the SLS Program is trying to minimize “wear and tear” on its first flight article while it does double duty for the Green Run. All four hydraulic systems behaved similarly, and the limits were conservative enough that any one of the hydraulic systems could have gone under them.

“System two got there first, but if it hadn’t gotten there first, one of the others would have tripped it,” Terry Prickett, NASA’s Deputy Chief Engineer for the SLS Core Stage, said. “It just happened to get below that threshold first.”

While the Green Run is a once-in-a-program opportunity, the flight vehicle still has its ultimate test in front of it, the Artemis 1 launch. There is a desire to preserve as much operating margin for the stage as possible for when it flies and not stress or overextend its equipment. 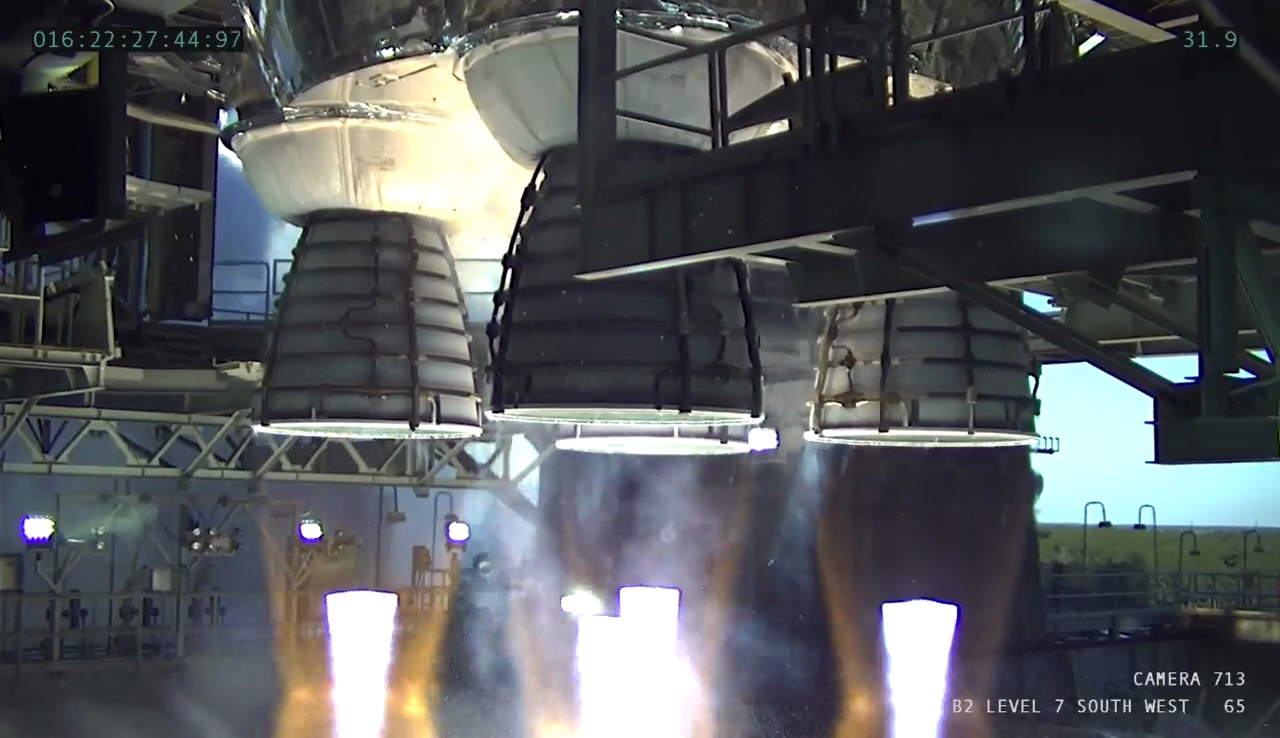 (Photo Caption: The four Core Stage engines throttled at 109 percent power in a fleeting view during the Hot-Fire test on January 16. The test coverage did not provide a view of the early engine shutdown, and during the minute that the engines were in mainstage, they were shown only once for a few seconds.)

Internally the Hot-Fire test on January 16 was characterized as a combination of “Wet Dress Rehearsal 3” and Hot-Fire; following some workarounds to satisfy test commit criteria during the final countdown, Boeing’s Stage Controller ground control computer system handed off to the SLS flight computers to run the Core Stage test. Running a special Core Stage-only, Green Run variation of the NASA-developed SLS flight software, the vehicle flight computers took over control at T-30 seconds. They initiated the Automated Launch Sequence (ALS) supervised the firing.

Beginning at T-6.6 seconds, the four engines were started at 120-millisecond intervals. First, the number one engine was started, followed by engine three, four, and two and startup for all four engines was nominal. During engine start, the data from one of four sensors measuring the pressure in the Main Combustion Chamber (MCC) of engine four was “noisy.” That sensor was disqualified 1.5 seconds after the start command.

Each engine has a dedicated engine controller unit (ECU); the dual-computer ECU categorizes this loss of redundancy as a Major Component Failure (MCF), but the sensor problem was not serious enough to shutdown the engine. The engine controller reported the sensor MCF to the SLS flight computers on the Core Stage, but it was also not serious enough to stop the ground test from continuing.

Although the bad sensor reading was the only problem initially reported after the test, it was unrelated to the violation of hydraulic test limits that aborted the firing.

The loss of redundancy would have been serious enough to stop a launch attempt if it occurred in the six seconds from engine start to liftoff. Flight rules say that a vehicle should start flight with full redundancy, and if this sensor failure had occurred before liftoff on a launch attempt, the SLS flight computers would have shutdown all the engines and aborted the attempt.

After liftoff, the system would have reacted to this kind of sensor issue in much the same way as it did during the Hot-Fire. The redundant sensor would have been disqualified by the engine controller, the issue reported to the flight computers, and all the systems would continue to run with no further action.

“Test constraints for hot fire were set up to allow the test to proceed with this condition because the engine control system still has sufficient redundancy to ensure safe engine operation during the test,” NASA said in a January 19 blog post.

A similar issue with one MCC pressure sensor out of four also would not have stopped a single-engine RS-25 ground test in the nearby A-1 Test Stand at Stennis. In the January 29 statement, NASA noted that the sensor reading problem in the January 16 Green Run test was not due to a bad sensor but was somewhere within the wire harness that carries the data from the sensor to the engine controller.

NASA also noted that the wire harness has already been repaired in preparation for the second Hot-Fire test.