Six years ago, the Green Bay Packers had the Seattle Seahawks staggering around CenturyLink Field in the NFC Championship Game, needing just one final jab to knock out the defending champs and punch their ticket to the Super Bowl.

An unforgettable collapse, featuring as many as 21 missed opportunities, allowed the Seahawks to come back and stun the Packers in overtime.

The script was flipped during Sunday’s NFC Championship Game at Lambeau Field. The Packers were left doing the staggering, the result of self-inflicted errors, but a chance to repeat the Seahawks’ escape act vanished thanks to a familiar antagonist: missed opportunities.

“We had our chances,” quarterback Aaron Rodgers said.

The autopsy of this latest NFC Championship Game disappointment reads a lot like the one from Seattle. Missed opportunities always have consequences.

The Packers made critical mistakes and then missed all their major chances to overcome them.

Here are all the misses, all the botched chances, and all the bungled plays that created the framework for a meltdown and eventually cost the Packers a trip to Super Bowl LV: 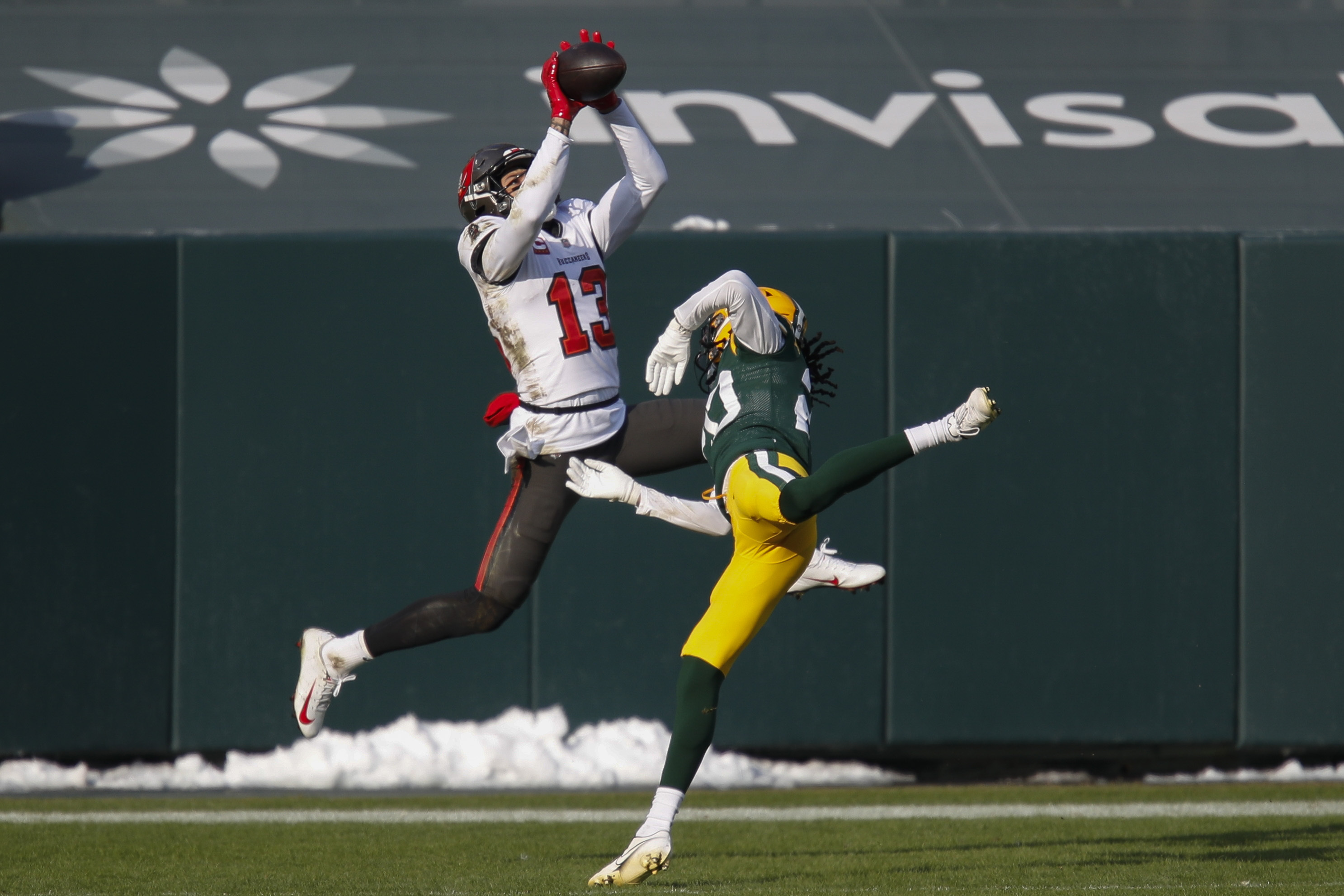 The Packers defense had three different opportunities to get off the field on the first drive. Slot corner Chandon Sullivan allowed third-down conversions to Mike Evans and Chris Godwin. On the third and final third down, Kevin King got beat by Evans, mistimed his jump with the ball in the air, completely missed the football and allowed Evans to catch the uncontested 15-yard touchdown pass. King was trailing but still had a real chance to break up the pass with the right play on the ball. What could have been a pass deflection and a field goal attempt turned into an opening drive touchdown.

Not all missed opportunities are self-inflicted. On the Packers’ first drive, Aaron Jones caught a short pass in the right flat and got roped down for no gain by a host of Buccaneers defenders, including Devin White. The problem? White had a handful of Jones’ facemask before bringing him down. With a 15-yard penalty enforced, the Packers would have had a new set of downs in Tampa Bay territory. Instead, Aaron Rodgers was sacked on 3rd-and-8 one play later, and the Packers punted. 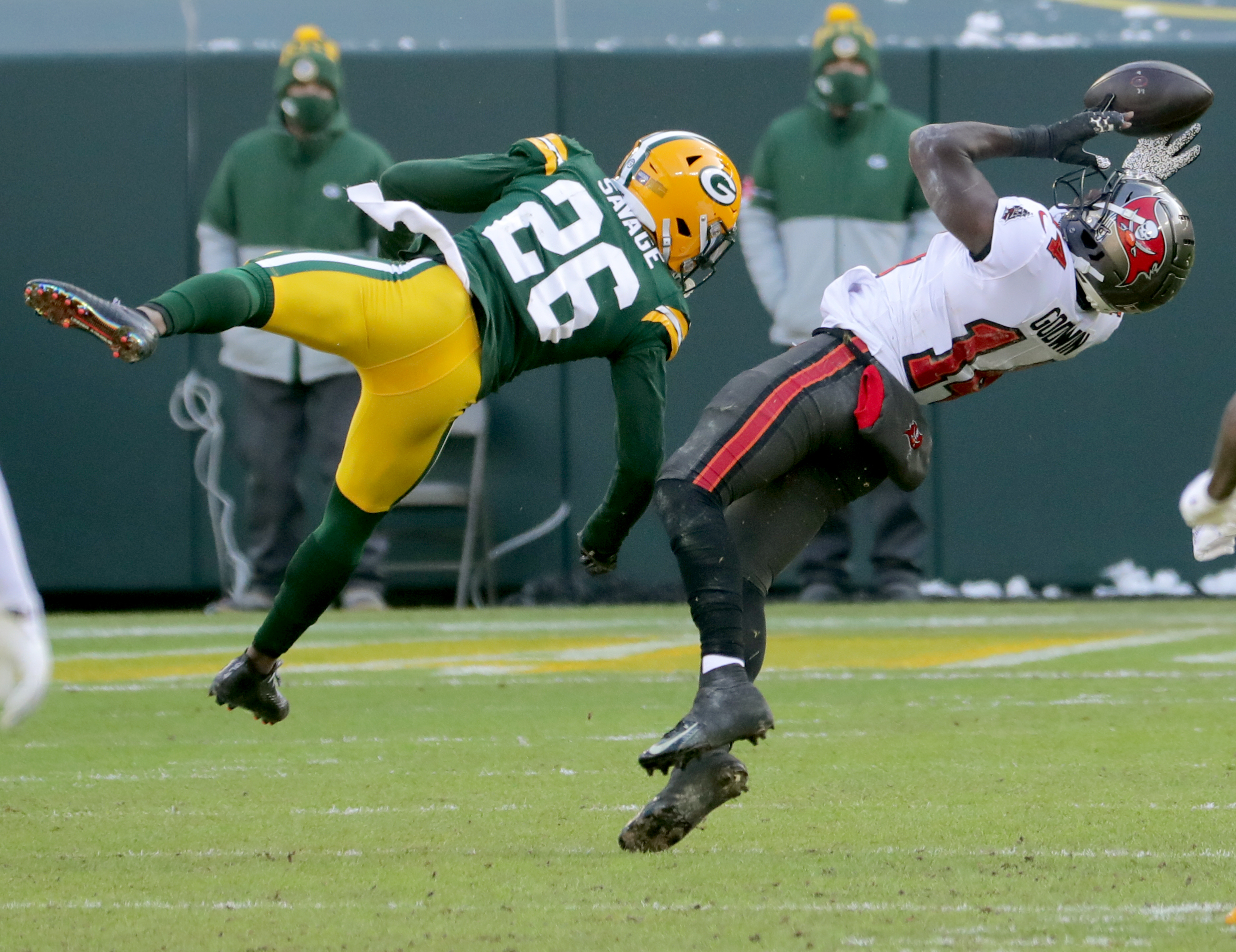 On the drive after the Packers tied the game at seven, the Buccaneers ran two failed plays and faced a 3rd-and-9 from their own 28-yard line. Once again, the Packers failed to get off the field. Brady threw deep down the middle to Godwin, who was one-on-one with Darnell Savage. The Packers safety was tracking the football and in an ideal position to make a play on the ball, possibly even intercept the pass. But Godwin made the play, beating Savage at the catch point for a 52-yard completion. Instead of a punt or an interception, the Bucs’ drive continued. They scored on the very next play.

The Packers trailed 14-7 but had a first down on the Tampa Bay 6-yard line. All-Pro Davante Adams received one-on-one coverage to the offense’s left. He won off the line at the snap, created instant separation in the end zone and was in a perfect position for a back-shoulder throw, which Aaron Rodgers delivered on time. A master of body control and finishing plays in the red zone, Adams spun back for the football, got two hands on the pass but couldn’t make the play. Adams and Rodgers usually finish this type of opportunity in their sleep. It was just one of those days. This misconnection between the MVP and All-Pro receiver summed it up nicely. 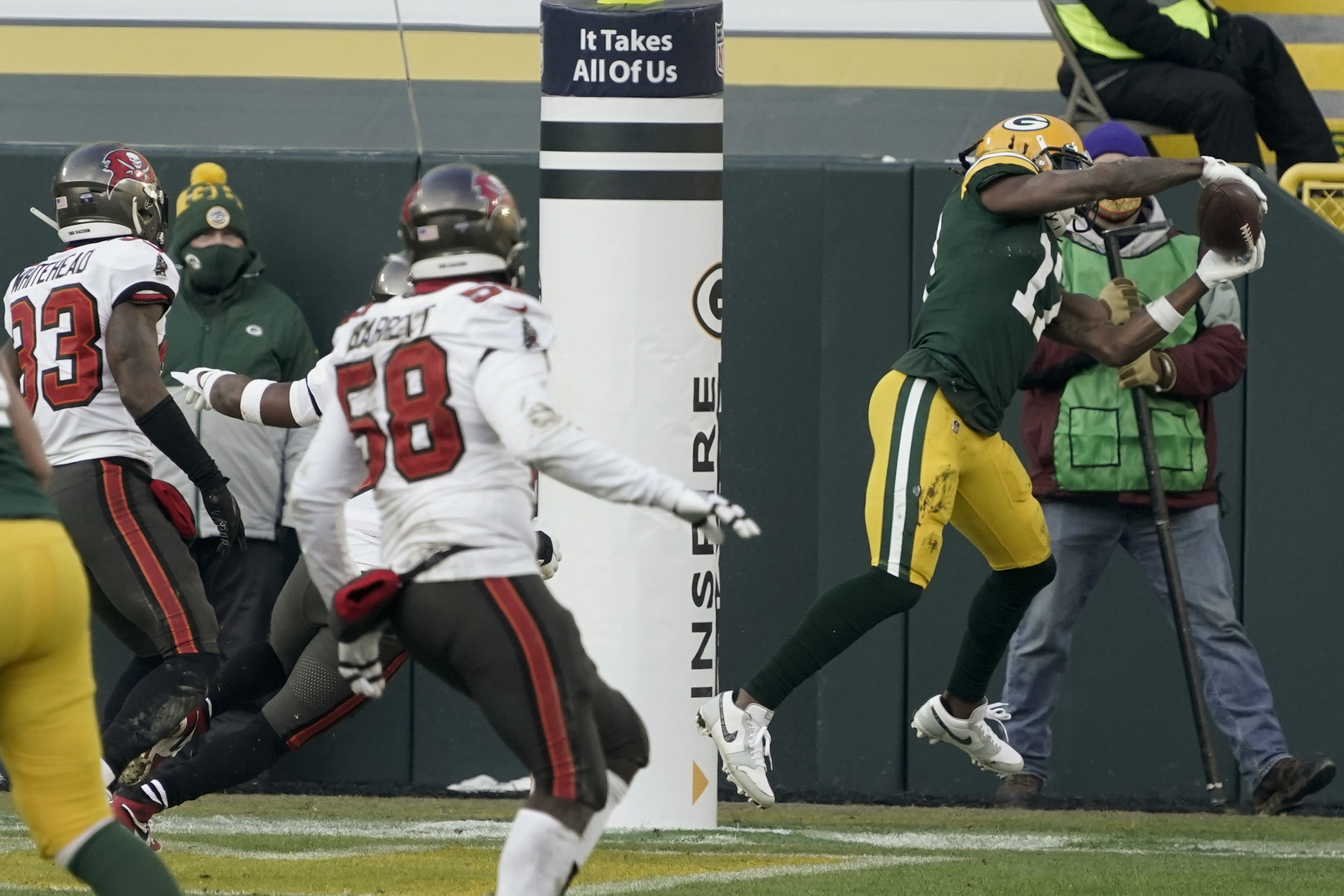 Two plays after Adams’ drop in the end zone, Rodgers had an opportunity to make amends on third down. Allen Lazard sprung wide open on a slant, and Adams burst into space behind the coverage up the seam. Rodgers missed Lazard coming open, and he was late throwing to Adams, likely the go-to option on the play. He actually connected with Adams, but the Packers receiver was at least two feet out of the end zone. Another uncharacteristic miss. Rodgers needed to anticipate Adams coming open on the route and make a tight window throw. He hesitated for a half-second, just enough for Adams to drift out of the back of the end zone by the time the ball arrived. 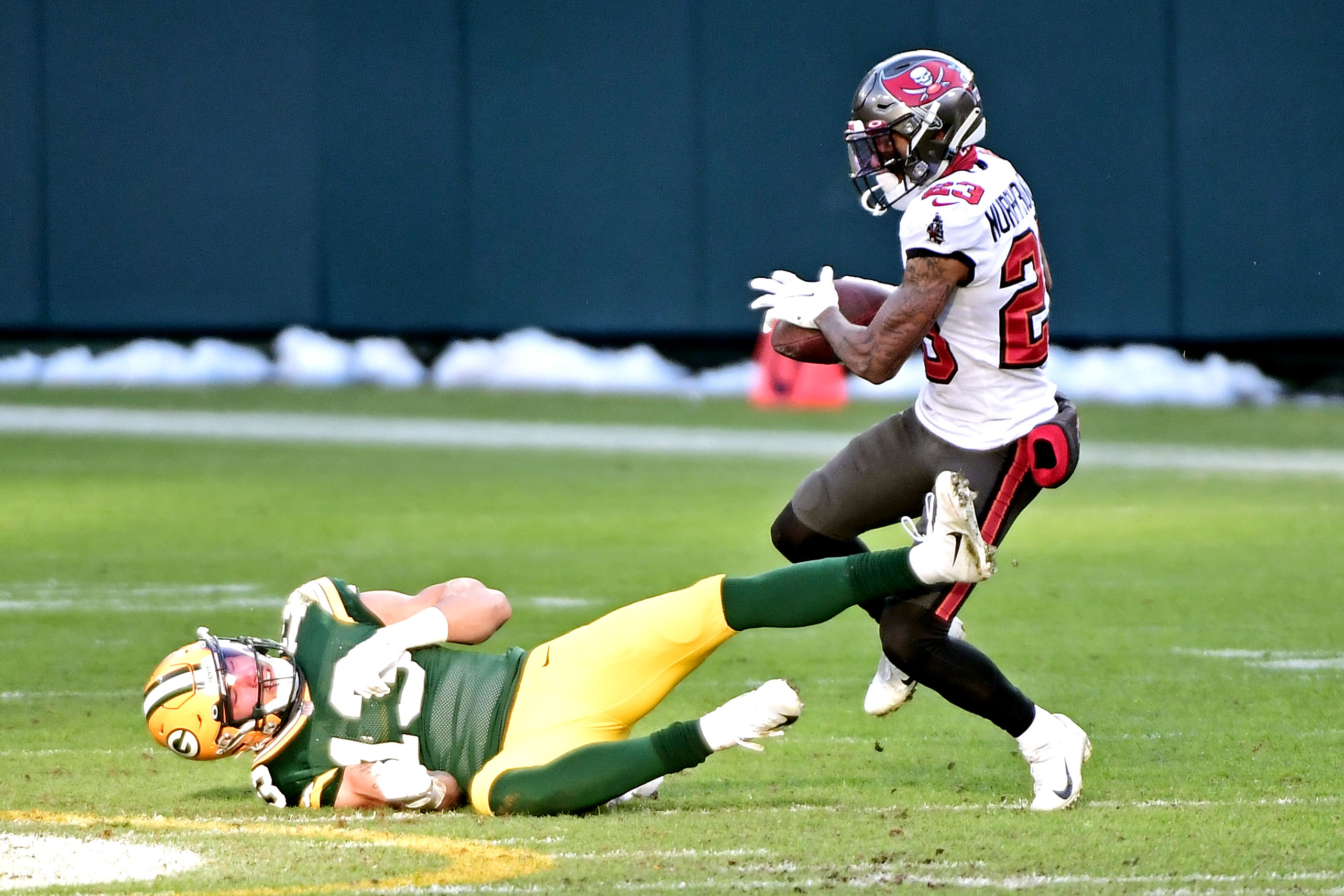 The Packers trailed by four but had a chance to take the lead late in the first half with a touchdown drive, and potentially build a 10-point lead before the Buccaneers had a chance to possess the ball again by doubling up before and after the half. Instead, Rodgers threw an interception to Sean Murphy-Bunting while attempting to squeeze the ball over the middle to Lazard. There was plenty of contact throughout the route but no penalty was called. The entire sequence for the Packers was miserable. They drained nearly a minute and a half on two plays following the two-minute warning, and Rodgers took a first-down sack after Billy Turner got manhandled by Jason Pierre-Paul. On the next play, he threw the pick with 38 seconds left.

On 3rd-and-4 following the Rodgers’ interception, pressure from Preston Smith helped force an errant throw from Brady down the right sideline. Will Redmond ranged to his left from a safety position and had an easy opportunity at an interception on the overthrow. The ball went right through his hands. After initially wanting to punt, the Bucs called timeout, went for it on fourth down and converted, setting up disaster. 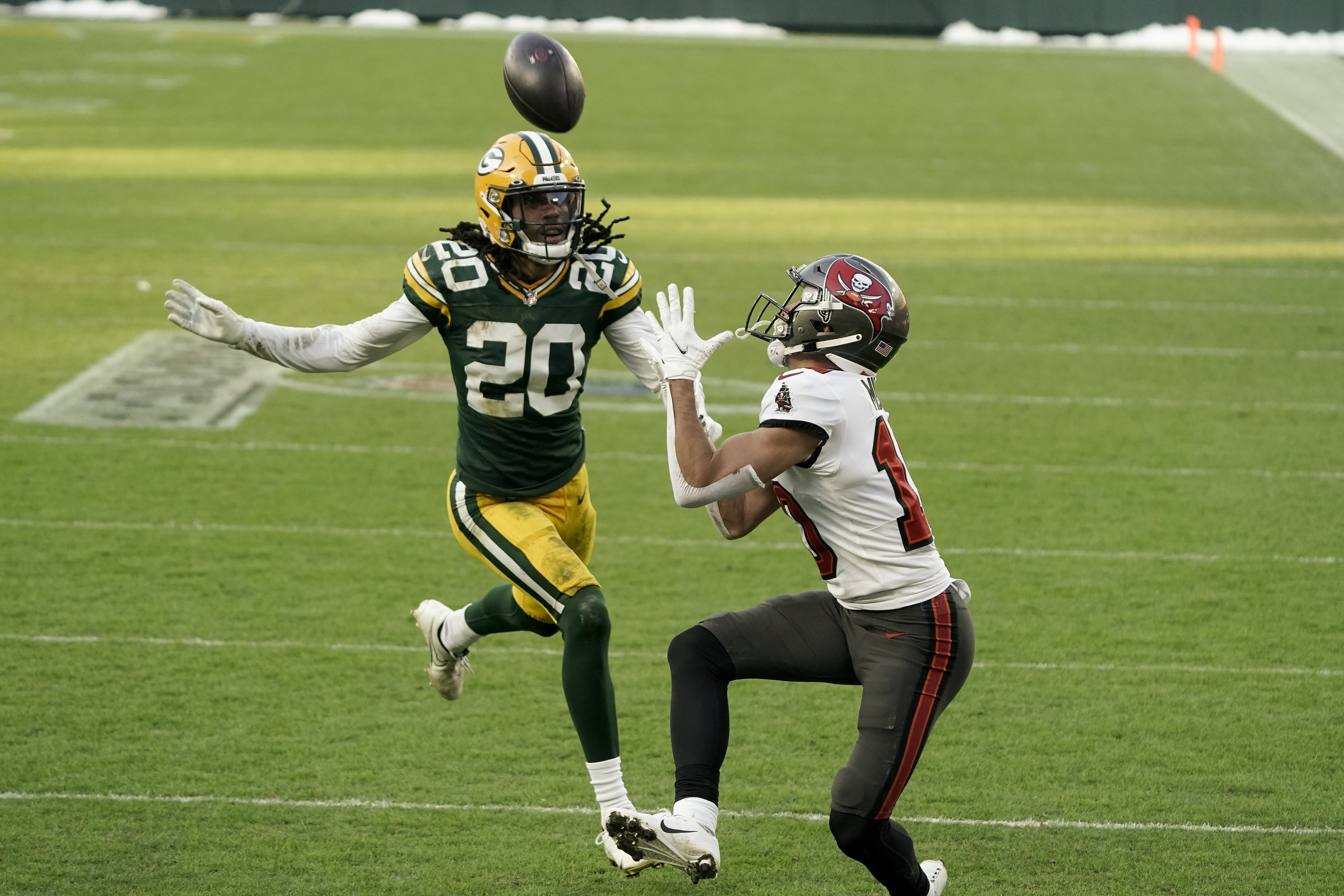 With six seconds left and the Buccaneers out of timeouts, all the Packers had to do was defend the sideline and not allow a throw over the top to end the half. Even on a poorly executed play, the worst outcome should have been the Bucs completing a quick sideline pass to set up a field goal. Clearly, the Packers were playing to stop a field goal attempt. Mike Pettine either called man coverage with a single high safety or some variation of Cover-3, leaving King all alone covering Scotty Miller. The Bucs got aggressive and went for seven, calling vertical routes across the board. King inexplicably let Miller get behind him and then couldn’t recover in time as Brady’s pass sailed over his head and into Miller’s hands for a backbreaking touchdown. Disaster. 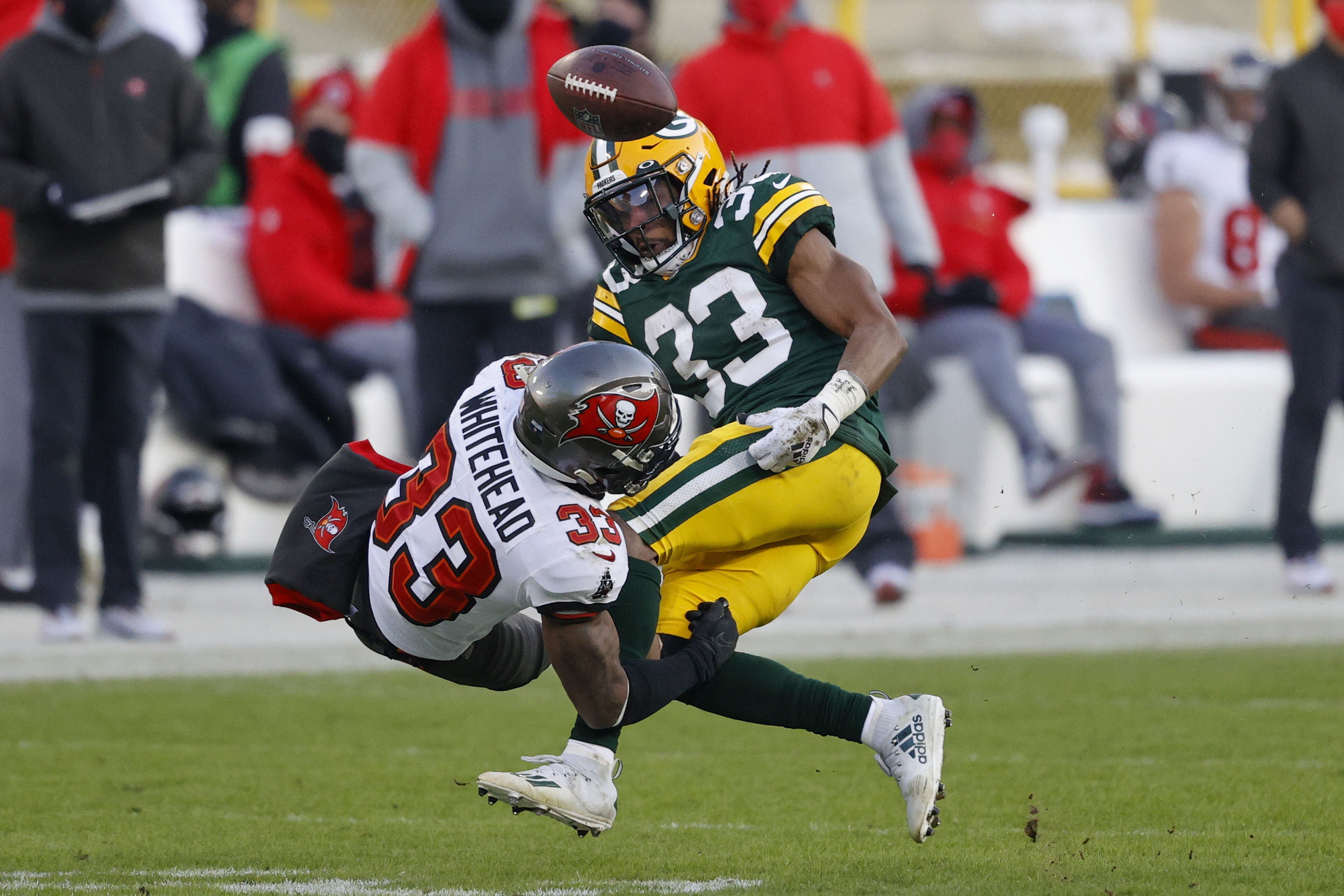 The Packers botched the end of the first half in epic fashion but still had a chance to get the ball to start the half and cut into the Bucs’ 21-10 lead. Any kind of scoring drive could have steadied the game. Instead, Aaron Jones fumbled the ball away on the half’s third play, setting the Bucs up with 1st-and-goal at the 8-yard line. Jones got popped in the open field by Jordan Whitehead. He left the game with a chest injury and didn’t return. It was a turnover creating a quick touchdown, and the loss of a star player.

The Packers cut the deficit to 28-23 on a touchdown pass from Rodgers to Adams late in the third quarter. Instead of kicking the extra point, Matt LaFleur went for two. The decision should have cut the lead to just three points. Equanimeous St. Brown dropped an easy catch opportunity in the end zone, robbing the Packers of two points.

Jaire Alexander’s first interception gave the Packers the football back down five points with just under 13 minutes to go. The opportunity to drive down the field and take control of the game late was available. Instead, the Packers went three-and-out, with a failed deep throw under pressure on first down and a third-down sack. The Packers scored just six points off of three turnovers. In Seattle in 2014, they scored just nine points off of five.

One play later, on third down, Rodgers actually fit in an amazing throw to Lazard on a crosser concept, but the ball clanked off the receiver’s hands in traffic and fell incomplete. With a catch, the drive would have continued. Rodgers said all the offense needed was one first down to get going. This was the opportunity. It required a great catch, but margins are always razor-thin at big moments in big games. With 8:20 left, the Packers punted the ball away again.

One more stop from the Packers defense was required to get the ball back with a chance to take the lead with a touchdown drive. Instead, the Bucs ran one great playcall and added three important points to their tally, vastly complicating the end-game scenarios. On 2nd-and-11, Brady hit Rob Gronkowski on a tight end screen for 29 yards, putting the Bucs into field goal position. The Packers eventually got a stop, but Ryan Succop hit a 46-yarder to extend the lead to eight points.

Down eight points but at the 8-yard line, the Packers had three shots to score a touchdown and set up what could have been the game-tying two-point conversion. On first down, the Packers ran a rather simple run-pass option concept. Lazard flashed wide open, Rodgers pulled the ball and fired, but the timing was all off and Lazard wasn’t ready for the ball or where Rodgers thought he’d be. With better execution, Lazard makes the uncontested catch and easily scores. The best red-zone offense in football had uncharacteristic lapses on the biggest stage. 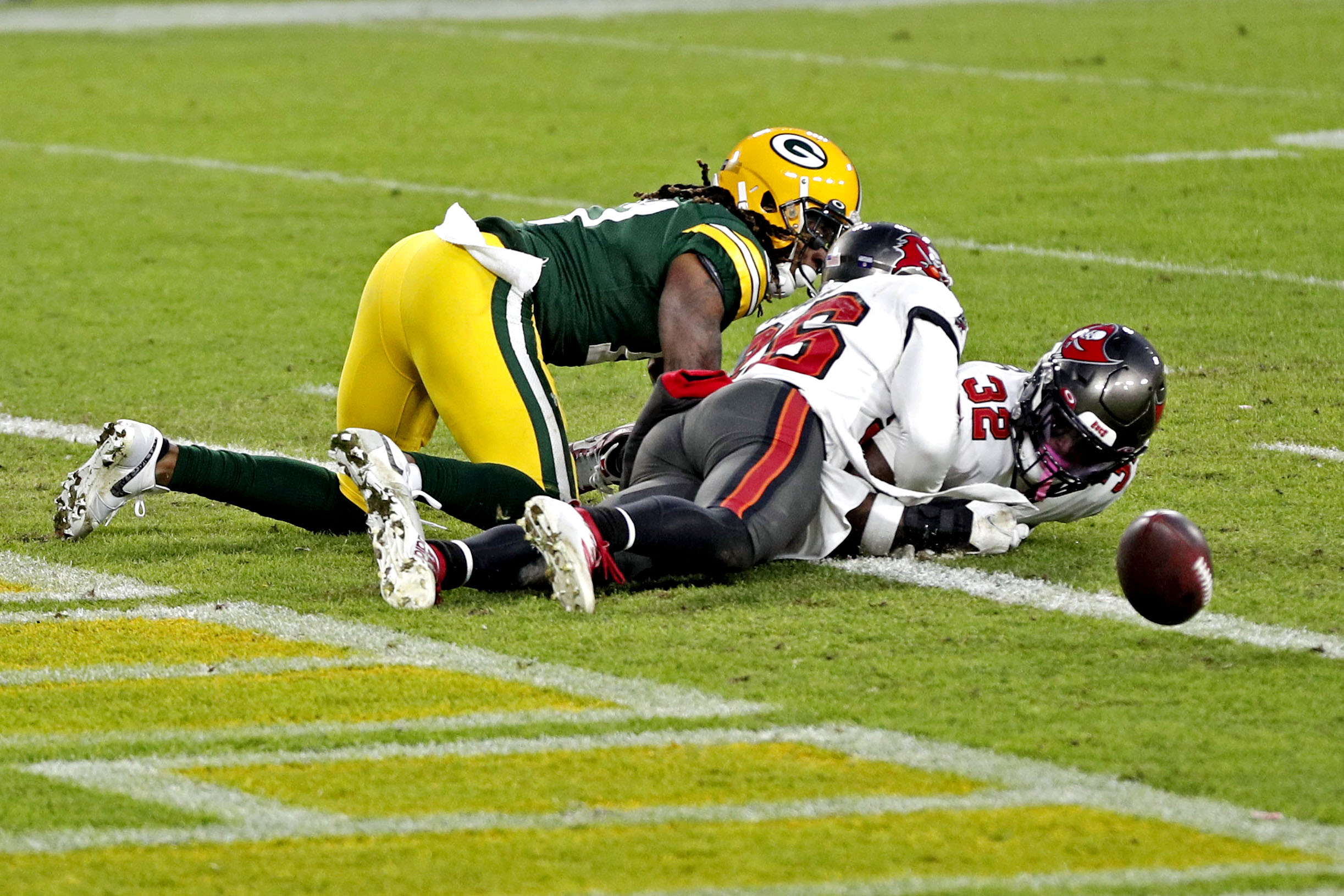 Two plays later, Rodgers wanted a similar concept as the one he was late on to Adams in the first half in the red zone. LaFleur gave him the shot. The Bucs covered it well and got pressure, forcing Rodgers up into the pocket. There might have been a chance to scramble into open space to his right and possibly score. But Pierre-Paul was in pursuit with an angle on Rodgers, and Devin White and at least two defensive backs lurked near the goal line. Getting to the end zone would not have been easy for a 37-year-old quarterback. Instead of running, Rodgers tried to direct traffic before firing back to the middle of the field towards Adams, but the throw never had a chance. After three straight failed passes, LaFleur decided to kick the field goal.

Despite needing eight points, LaFleur decided to kick the field goal on fourth down. It cut the lead to five points and eliminated the overtime scenario, but it also required the Packers defense to get another stop and the Packers offense to drive the field and score a touchdown to win. Rodgers admitted surprise that the offense didn’t get a chance to go for it on 4th-and-goal from the 8-yard line. LaFleur trusted in his defense to get a stop over his MVP quarterback to get a touchdown and a two-point. In the end, the Packers settled for two field goals inside the 10-yard line. That’s eight points of red-zone failure in a game that ended in a five-point Buccaneers win. 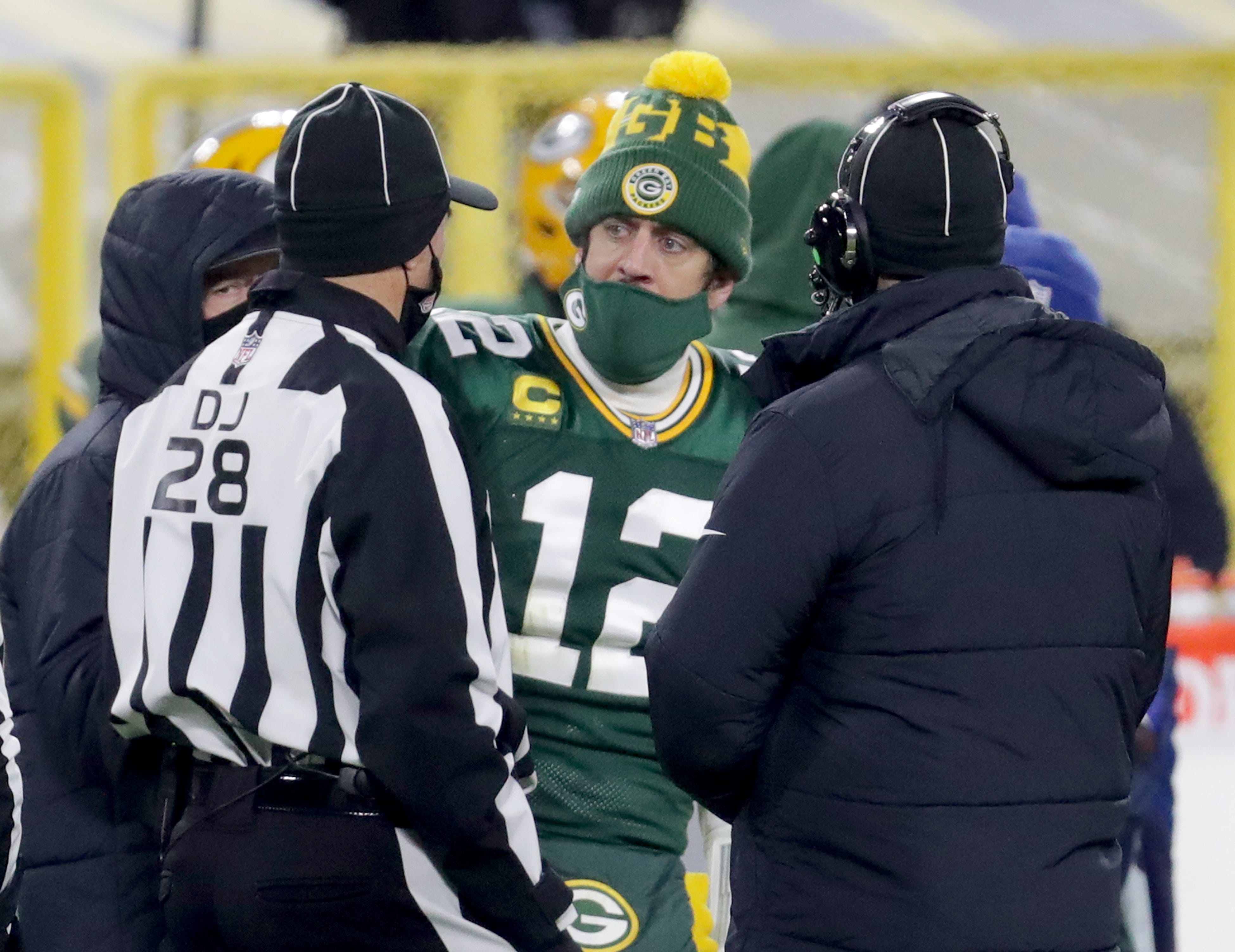 A fitting end for the Packers defense. It had to be a third-down failure and a mistake by King. On 3rd-and-4 with 1:39 left, Brady attempted to float a pass on a crossing route to rookie Tyler Johnson with King in coverage. Officials flagged King for pass interference, giving the Bucs a new set of downs. At the very least, King tugged on the jersey and was guilty of holding. For much of the game, officials had let contact go down the field. Without the penalty, the Packers would have gotten the ball back down five points with about 90 seconds left and one timeout. Instead, the Bucs ran five more plays and killed the rest of the clock.