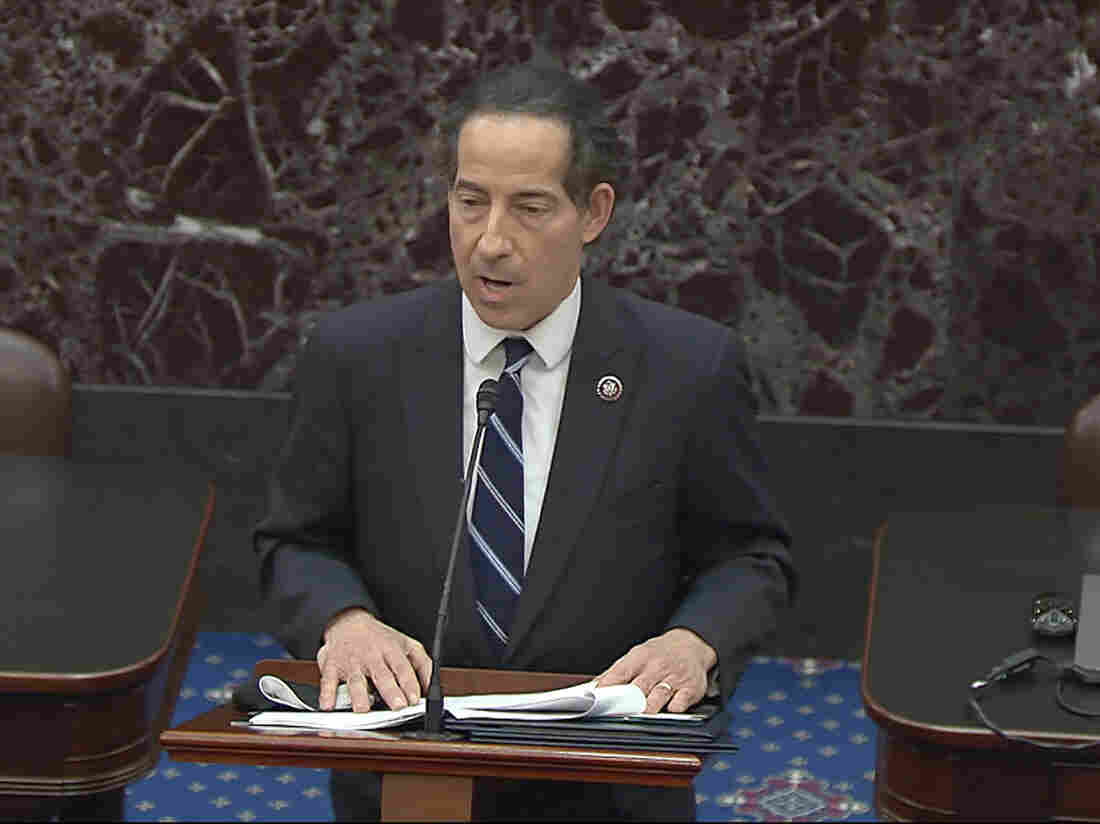 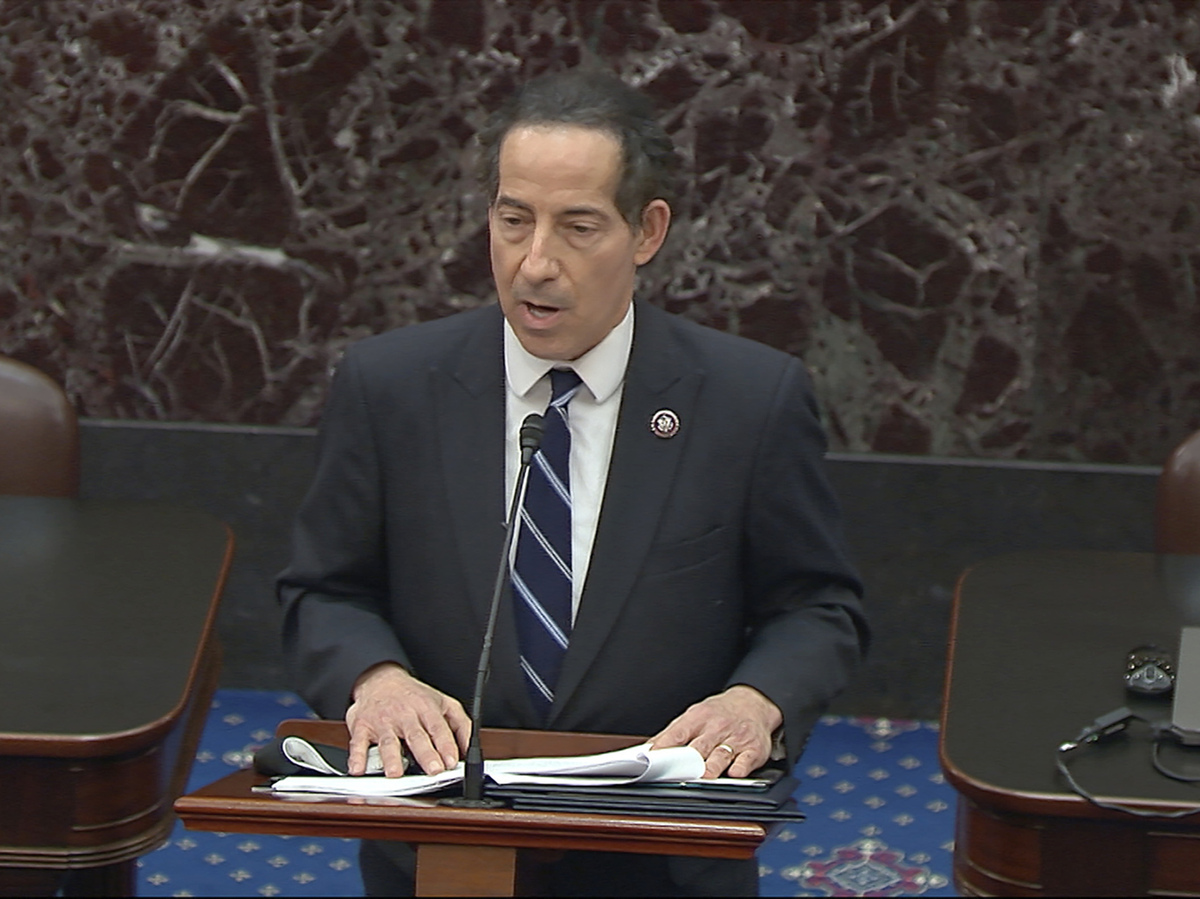 Maryland Democrat Jamie Raskin is preparing to lead the second Senate trial of Donald Trump with two clear arguments in mind: Trump was responsible for the attack on the Capitol on Jan. 6, and the Constitution allows Congress to hold the former president accountable through impeachment.

Raskin, a former constitutional law professor, is preparing to make that case to a Senate where 45 of 50 Republicans voted Tuesday to reject the second part of his argument. Democrats have always faced an uphill battle to persuade the Senate to convict Trump and move on to a vote to bar him from federal office, but Raskin says he has to try anyway.

“The Constitution applies on your first day of office; it applies on your last day in office and everything in between,” Raskin said in an interview with NPR. “This violent attack, insurrection, against the union is the worst presidential crime in American history, and would set a terribly dangerous precedent if we didn’t respond to it.”

Senators have already been sworn in to their roles as jurors in the trial, but arguments won’t start until at least Feb. 9. By that time, more than a month will have passed between the day when senators were witnesses to the crime of the insurrection and when they are called on to be impartial arbiters of whether Trump was personally responsible for the events. The House impeached Trump Jan. 13.

“There’s nothing abstract or conceptual or academic about this high crime and misdemeanor for any member of Congress,” Raskin said. “This was a direct attack on our electoral institutions. This was an effort by the president, and also by the mob that followed him to interfere with the counting of Electoral College votes that was going on at the time.”

Raskin dismissed arguments by Republicans who want to skip a trial on Trump’s actions because, they say, the very process of impeaching a former president is unconstitutional.

“Use your common sense,” Raskin said. “Everybody can understand that if we had a rule that you can’t be tried for anything that you did in your last three or four or five weeks in office that would basically be sending an extremely dangerous signal to future presidents.”

Democrats plan to argue that Trump’s speech before the riot and his efforts to overturn election results directly led to what Raskin says was a traumatic attack.

For Raskin, that day’s events were an added layer of trauma. Days before the mob breached the Capitol, Raskin’s 25-year-old son killed himself after struggling for years with depression. Raskin was grieving that loss when House Speaker Nancy Pelosi called on him to lead this impeachment.

“I mean it’s a solemn and awesome responsibility and I feel the weight of it all the time,” Raskin said.

He said he talked things over with his wife and their daughters and decided to take on the task.

“I think that we all knew it was something that I needed to see us through,” he said.

“It is taking the tragedy of the loss of his son and the tragedy of the attack on the Capitol and putting them together in a way that says, ‘We have work to do, we have to carry on,’ ” Wermiel said. “Of course, he’s grieving. Of course, he’s genuinely devastated and heartbroken. But he’s going to use that to to move himself and his values forward for the good of the country. I think that’s just really who he is.”

House Democrats say that’s a big part of why Raskin was chosen for the job. Pelosi called on him because of his background in constitutional law and his clear arguments on the Judiciary Committee, and because he helped draft the article of impeachment — incitement of insurrection — he will be trying.

Rep. Val Demings, D-Fla., who served as an impeachment manager in Trump’s previous Senate trial, says Raskin’s focus on constitutional law is a fundamental part of the way he thinks.

“I think about when we were kids and the baby doll that I played with and my brothers were playing with G.I. Joe,” said Demings, who was elected the same year as Raskin and has served with him on the House Judiciary Committee. “Jamie probably had a copy of the Constitution.”

Demings said Raskin’s background teaching the Constitution to college students and law students makes him an ideal person to present an impeachment article to the public. She said his way of arguing and connecting evidence is one of his great strengths.

“I think there’s no better person to really lead the impeachment team to help America understand clearly why impeachment was given to us as Congress, as a tool to hold the president accountable,” she said. “He loves this country and he loves the U.S. Constitution and what it stands for.”

Wermiel said Raskin’s teaching style has always been about a practical relationship between the Constitution and democracy in action. The two c0-founded an organization that connects law students with high schoolers to help them learn and understand their rights under the Constitution. He said Raskin has always found a way to connect with people, regardless of political affiliation.

“I think he has the capacity to make the arguments principled arguments rather than than political arguments,” he said. “He also has a capacity to say things in ways that are slightly flip, slightly irreverent, not so much so as to to be offensive or deeply disrespectful, but enough to to to hit with a punch.”

Democrats also hope that Raskin and his team of eight other House members can take advantage of the rare opportunity to argue before a jury of people who were directly harmed by the attack. They don’t expect to encounter a largely dismissive, distracted group of GOP senators like they saw during Trump’s first impeachment trial, which ended with the president being acquitted last year and only one GOP senator — Mitt Romney — voting to convict him.

That does not mean it will be easy this time to persuade 17 Republicans to vote with Democrats to convict Trump. Indeed, the 45 Republican senators who voted Tuesday against holding an impeachment trial at all suggests this trial will be contentious, as well.

But Raskin says this impeachment is about the important precedent of following through with a constitutional duty — and because the nation needs to heal.

“I think, for the country to process this trauma, and get through it, we have to remember it,” Raskin said. “And I think that’s true in constitutional terms, it’s true in political terms, and it’s true in psychological and emotional terms.”