Matthew Stafford and the Detroit Lions have agreed to part ways this offseason, which is something that could (should?) matter greatly to the 49ers as they search for potential upgrades over Jimmy Garoppolo. A union between Stafford and San Francisco could wind up being beneficial to both parties.

Consider where Stafford’s career sits. He’s 32-years old, a 12-year veteran, has a sub-.500 record as a starter and is 0-3 in the postseason. All of this comes despite the fact he’s already No. 16 all-time in passing yards. Stafford is a better player than his record and lack of postseason success would indicate. As he looks to turn the page on his career while he still has prime years left, a team like the 49ers could help him shed some of the monkeys that’ve taken residence on his back.

The impact Shanahan has had on some other quarterbacks points to a lot of potential for Stafford within the 49ers’ offense.

It’s not an apples-to-apples comparison because the offensive weapons are different, but it’s worth noting what Matt Ryan’s numbers looked like prior to Shanahan’s arrival in Atlanta and how they compare to Stafford’s through 12 seasons. Since Stafford played 55 more games than Ryan did pre-Shanahan, we’ll stick mostly to averages.

Ryan through his first seven seasons was completing 64 percent of his throws for 256.1 yards per game, 7.2 yards per attempt, a 4.5 percent touchdown rate and a 2.4 percent interception rate. He held onto a 91.1 pass rating in that span.

Stafford’s first 12 years are remarkably similar. He completes 62.6 percent of his passes for 273.4 yards per game and 7.2 yards per attempt. His touchdown rate is 4.5 percent and his interception rate is 2.3 percent. Stafford’s passer rating is 89.9 after 12 years.

Both players struggled in postseason situations, too. Stafford is 0-3 in his first three tries. Ryan was just 1-4 before Shanahan arrived and helped the Falcons get to the Super Bowl.

Ryan’s first season under Shanahan in 2015 was relatively similar to his first seven years, but his second season in that offense was his MVP year where he blew up for 4,994 yards, a 7.1 TD rate, 1.3 INT rate and 9.3 yards per attempt. It’s not out of the realm of possibilities that a player as talented is Stafford sees a similar uptick in production, especially since he already has a 5,000-yard season under his belt and a couple of 30-plus TD seasons.

One reason for pause might come when looking at Stafford’s career .448 winning percentage. Typically great quarterbacks don’t lose more than half their games, but it’s worth pointing out just how abysmal the Lions have been during that time.

Their offensive rosters haven’t been stellar either. While Stafford benefitted from some good pass-catching weapons, there’s been no run game to speak of in Detroit. Since 2009, they’ve had one player rush for 1,000 yards in a season. That was in 2013 when 28-year-old Reggie Bush posted 1,006 rushing yards.

The 49ers have a hump to get over of their own. They’ve been without a Super Bowl win since the 1994 season, and their last trip in Super Bowl LIV fell short in part because of the quarterback play. Garoppolo wasn’t the reason they lost, but it’s hard to imagine what the 49ers offense would look like with a quarterback who stretches the field more effectively. Stafford would do that while providing a little financial relief in a year where the salary cap could start to be an issue for a talented San Francisco club that has some players to pay.

The 49ers would be taking on a quarterback that figures on paper to be an upgrade over Garoppolo. Not to mention Stafford’s durability has been better throughout his 12 seasons. The only time he’s missed outside of his first two seasons came when he fractured bones his back and missed eight games in 2019.

Perhaps Shanahan doesn’t view Stafford as enough of an upgrade over Garoppolo. If the 49ers believe there’s a better, healthier version of Garoppolo to come, or if the draft capital needed to acquire Stafford gets too high, then perhaps they stick with him. However, given what we’ve seen from the likes of Matt Ryan in Shanahan’s offense, it’s hard to imagine they won’t at least kick the tires to see if they can get elevate Stafford to help get themselves back to the top of the NFL mountain.

49ers options at quarterback next season 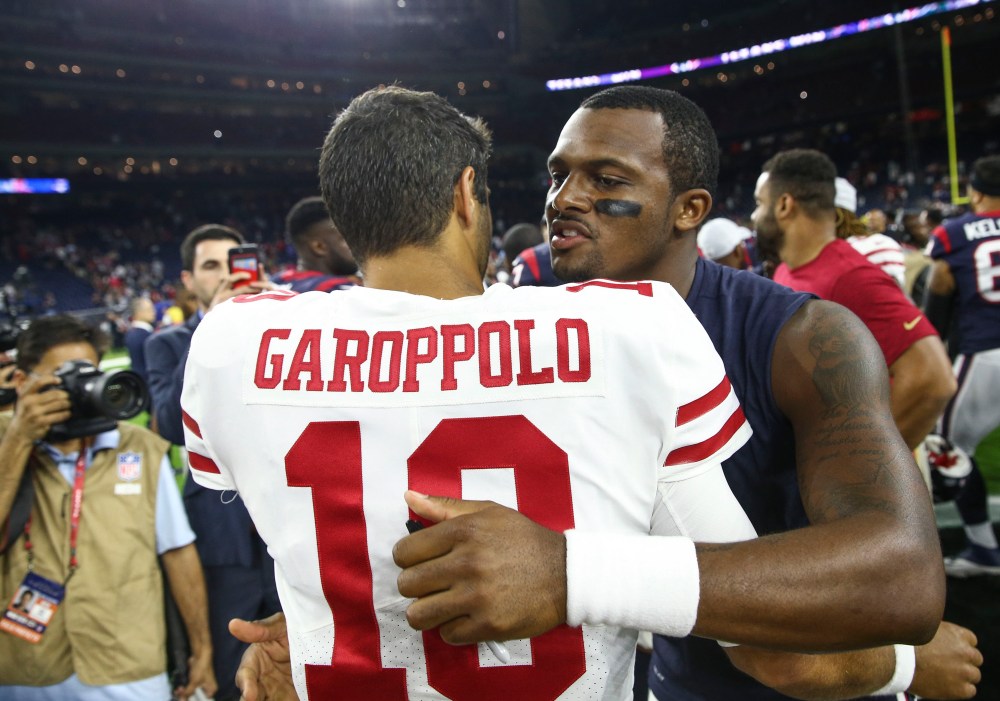